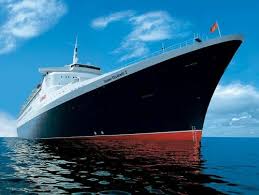 Specialist Cook on the QE2

That meeting was productive, and within ten days I was on my way to Southamptonto meet up with another union rep, and on the 13th December I signed on the QE2 as a specialist cook, and was setting sail on a world cruise.

It’s only as I look back on how quickly I had gone from being involved in the drug trade and with some of the most notorious gangsters on Merseyside, to setting sail on the QE2 for New York, and the beginning of a world cruise, that I realized just how things had so inexplicably fallen into place, and how quickly I had managed to get from A to B, and believe me that was only the start of things.

As you will have noticed, I have not used any names thus far.  Not because I am worried about naming people, but because although the people I mixed with were, as I have said, ‘notorious villains’, they are small fish in a big pond compared to the people I met and got involved with from that point on.  And this is where I will start using names, because you have a right to know, and that is the purpose of this story, and the reason I believe I was given a second chance.

Before going any further I think I should reiterate on a few points.

Firstly, I am a Roman Catholic, brought up in a very loving and stable home, by two wonderful devout practicing Roman Catholic parents.  And I am the youngest of their three children, and was always completely different from my elder sister and brother, who were, and still are, as equally devout in practicing their faith as my parents were up until the day they died.

Secondly, I believe that the way I was, and the way I conducted myself, is now an asset. Why?  Because to know how to fight filth, you have got to have the experience of being in the gutter, because it gives you the ability to spot things that others without that experience would overlook.  The devil has many faces, and operates right at the very heart of all powerful institutions.  Let’s face it; you would not expect him to be a shopkeeper, or a bricklayer, would you?  His power and influence reaches those types of people through tentacles that weave their way through societies world- wide.

He profits from our human failings, and seduces people into his web before draining their very souls of every bit of goodness. It can be a very gradual experience, which starts with a minor offence, or what we call a venial sin, but which if left unchecked can lead to far more serious offences or mortal sins.  And then it becomes harder and harder for the offender or sinner to repent, mainly because of the guilt he feels, and the feeling of despair at what he has done.  Some children steal a few sweets from a shop and never steal again, while others think ‘that was easy’, and move on to become bank robbers.

That may seem a very extreme statement, but when you think about it, you have to agree there is a starting point for everything.

At this stage I will resist the temptation to expand on this subject any further, but will ask you to keep it in mind as you read on.

As I stood in line waiting to sign on for the voyage, my heart was thumping in my chest, still expecting something to go wrong, and expecting that I would be refused and sent ashore.  But that didn’t happen, and I remember thanking God as I almost skipped down the aisle that led to the companionway to go below decks, where I would find my cabin.

The size of the ship was breath-taking.  It was like a floating city, and finding my cabin was no easy task, but eventually I found the catering accommodation, and the alleyway where my cabin was, and dragging my suitcase behind me, walked up it.

The door was locked, and I didn’t have a key because it was a two-berth cabin, and the person who was on leave passed his key to his cabin mate, who in turn passed it to the next person he was going to share with.

All I could do was wait, so I put my case against the bulkhead and sat on it, feeling elated.

Then the door of the next cabin down opened, and out stepped a lad, dressed in a white jacket and checked trousers.  He looked at me, smiled, and said, ‘Just joined have you?’ ‘Yeah,’ I said, nodding my head, smiling back and asking, ‘When will the fellah in here be down to let me in?’

As soon as he heard the accent he said ‘Another scouse! You lot are taking over the ship!’ And then added, ‘Grab your bag, and come and sit in here, Frank will be down in about half an hour.’ Then he pushed his cabin door open a bit, and said,’ See you later.’ and walked off.

Getting up and pulling my case to the door, I pushed it open, and there he was.  Lying on his bunk, in a just a pair of shorts and flip flops.  Roger Slee, the man that changed the course of my life by making me realize just how corrupt and manipulative the establishment is.

His first words to me in a broadPlymouthaccent were, ‘Alright scouse?  I’m Roger. I don’t drink, but I like a smoke.’

Mimicking his accent my reply was, ‘I’m Peter, and I don’t drink, but I likes a smoke myself.’ And that was it the beginning of the perfect friendship.

The one thing that had bothered me about getting back to sea was, would I be able to stay off the booze? I had been five years teetotal at that time, so to join a ship with eighteen hundred crew, and the first person you sit down and talk to is teetotal, is one hell of a coincidence, but that’s the way it was, and that was just the continuation of a long succession of coincidences.  Which at the time they’re happening, you don’t put any store in, but when you’re at the stage in your life that I am at now, and you can look at events retrospectively, they stick out like a sore thumb!

Going from sleeping on my mate’s couch, to standing on the poop of probably the most famous liner in the world, smoking a joint and listening to a band play, as I set sail from Southampton on a world cruise, with thirty two ports of call to look forward to, was amazing.  But what was to happen over the next twenty six years could never have been imagined by me, not even in my wildest dreams.  I certainly never imagined that I would be sitting here as I am now, typing this, and knowing what I know.